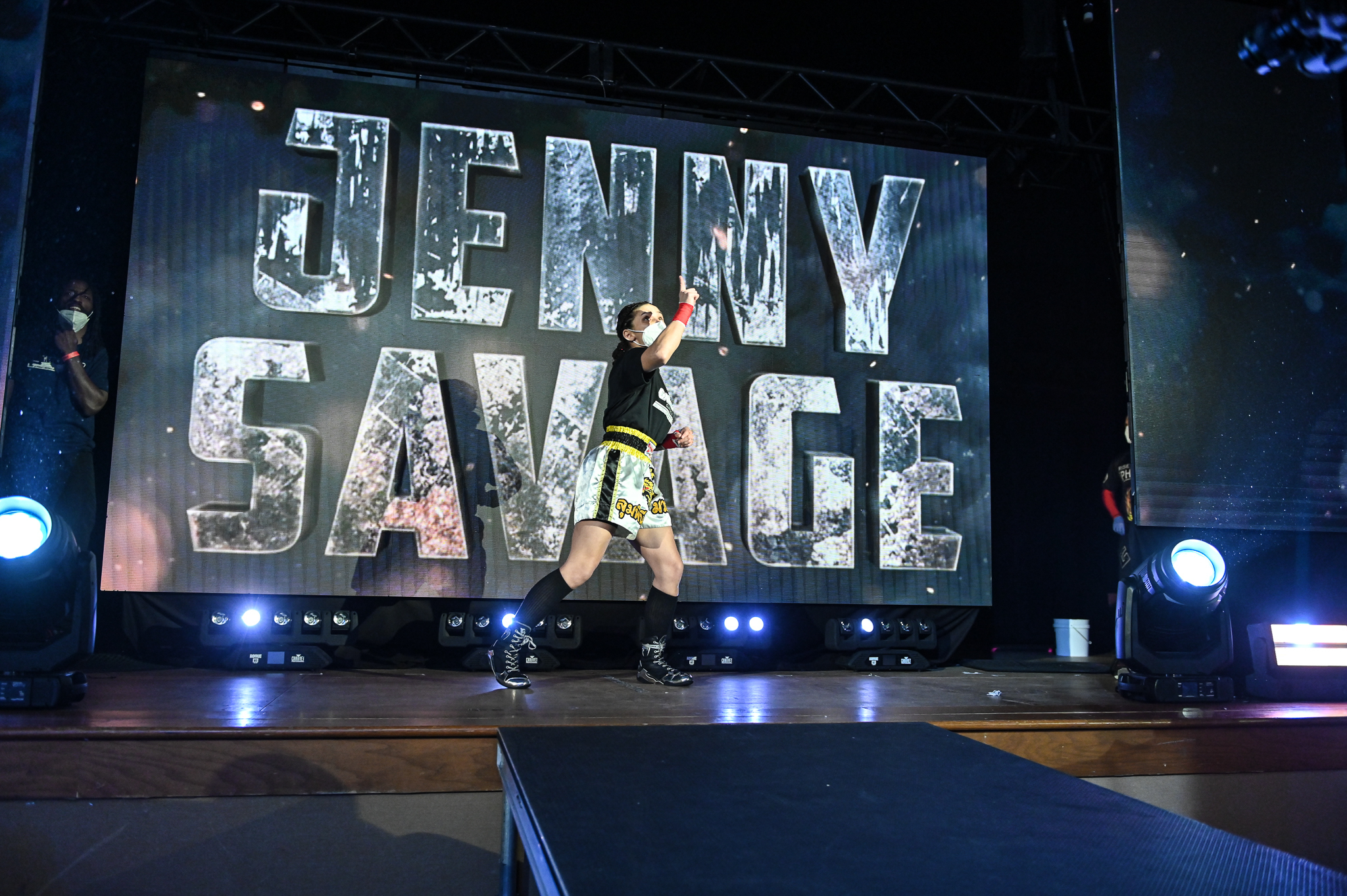 After her entire world was flipped upside down, fighting for her son's future became Jenny Savage's number one priority.

Jenny Savage has experienced the thrill of competing before a live audience and globally on pay-per-view, but she's also been hit with some of the hardest shots that life can throw, outside the ring.

When her son's father tragically took his own life, the now 28-year-old fighter from Tennessee became the sole provider for her family.

Raising a child on her own, while trying to further her education, was not cutting it for Savage.

Something had to be done. She knew that if she was going to make any headway in combat sports, she needed to get eyes on her, and quick.

Britain Hart had just defeated former UFC star Paige VanZant in the night's main event and the stage was set.

Jenny jumps up into the ring to confront Hart, foul language ensues, water bottles dumped, and we now how official build up to a fight months in the making. At first many did not know who was in the ring, including Hart herself. Once the confrontation kicked off, it set up a grudge match that continues to add fuel to the fire along the way.

What was not apparent to the naked eye while watching the pay-per-view event at home, was that all three women had spats on social media prior to fight night. Savage and Paige, Paige and Britain, Britain and Savage; they all were at each others' throats.

"There's definitely a prior history," Savage said of her confrontation with Hart. "I didn't just jump into the ring for no reason. She had been disrespecting me since before my debut. She disrespected my relationship with my man."

Savage went on to say that some of the insults thrown were personal in nature, and even after the pending fight is over, she likely won't be sending Hart any Christmas cards as the two will not become friends.

"She made fun of my height," Savage said. "She said I have zero skillset, no experience. She was just being trashy. How do you not want to fight someone who keeps picking on you and poking at you? She's a damn bully. I'm over here just trying to make ends meet, pay my bills, and put my son through homeschool because public schools failed him with his disability, and she's just constantly picking on me and bullying me.

Had VanZant won the outing against Hart, Savage was still going to make an appearance, except the former UFC star would have been the intended recipient.

"Who wouldn't want to achieve their dream of fighting someone they have looked forward to fighting their whole entire career? To share the ring with somebody I respect, like Paige VanZant , despite what she does outside the ring, I figured that would be a payday for my son after he lost his father," she said.

That big pay day opportunity may come down the road, but first Savage will have to get through Hart, keep her unblemished bare knuckle record in tact.

Savage is currently 1-0 in the Bare Knuckle FC promotion, with a win over Sheena Bradenburg in her debut, while Hart has gone 2-2 with BKFC including wins over VanZant and Randine Elhkholm, and losses to Bec Rawlings and Christine Ferea.