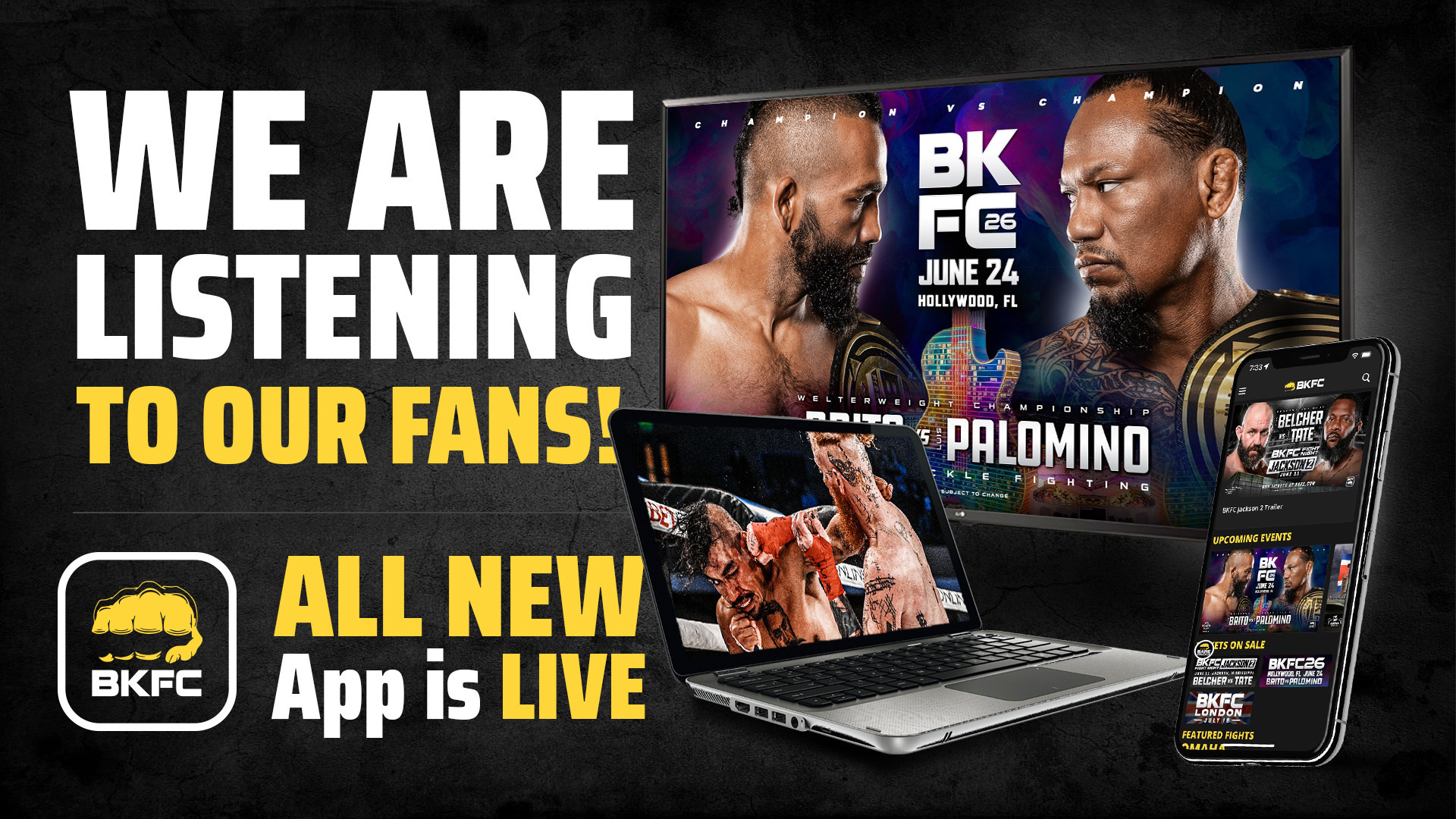 When fans download the new and highly improved BKFC app, they’ll be closer to the Bare Knuckle Fighting Championship Squared Circle than ever before.

BKFC is thrilled to introduce the beginning of new, state-of-the-art technology that significantly improves the live streaming experience for all BKFC events.

"We're extremely excited for the arrival of the new BKFC app," said David Feldman, President of BKFC. "This app is designed by some of the brightest and most innovative developers on the planet. It's going to allow our fans around the world to get closer to the action in the Squared Circle than ever before. This is the game-changer our fans have been asking for, and we're so happy to deliver it to them."

Fans will soon be able to totally immerse themselves in the BKFC universe, with revolutionary fight tracking and sorting systems, virtual reality, and cutting-edge gaming. BKFC news, interviews, podcasts, and MUCH more – all easier and faster than ever before.

To have access to the new and highly improved BKFC app and its exciting new features, fans must download the new app and reset their password if they had an account with our previous technologies.

There’s no better time to do that than before June 11, when top heavyweight contenders Alan Belcher and Frank Tate collide in the Main Event of BKFC Fight Night Jackson II, LIVE exclusively on the BKFC app.

BKFC's Chief Technology Officer, Christy King, is thrilled that some of the top technology vendors in sports came together to form a team of eight companies that have worked to build a platform for streaming and entertainment that will be the envy of the sports world. "I am so proud of these companies who worked hard over the last four months to create a baseline of technology that will provide the highest quality streaming for live events, an incredibly fast interface, and gives us the technical scaffolding to take advantage of cutting-edge virtual reality entertainment, provide betting opportunities, new games, ways for fans to interact with each other and fighters, innovative sponsor activities, and so much more. Now that the tech platform is in place to support mobile devices, OTT systems, and our website player, we can spend the next six months introducing all-new cool things for sports fans to experience!"

A key vendor for this new BKFC fan experience is FanReach. Gabe Smallman, the company's President, said, “We have been having a blast working to put our app platform behind BKFC. We support some of the biggest teams in football, soccer, hockey, and other sports. But as a combat sports fan, I am personally excited that we got to put the power of our technology behind a burgeoning new combat sport. We have a hundred ideas and the BKFC team is working closely with us and our partners to use the latest technology to bring fight fans truly new experiences. It’s going to be a great year for fight fans!”

Chris Palmquist, COO, Combat Sports Registry chimed in to say, “We have been hard at work for weeks on developing a deep set of data on the athletes in Bare Knuckle Fighting Championship to showcase what an incredibly technical combat sport this really is. We’re excited to release this data within the new app and look forward to using that information to help create some really cool, cutting edge fan experiences.”