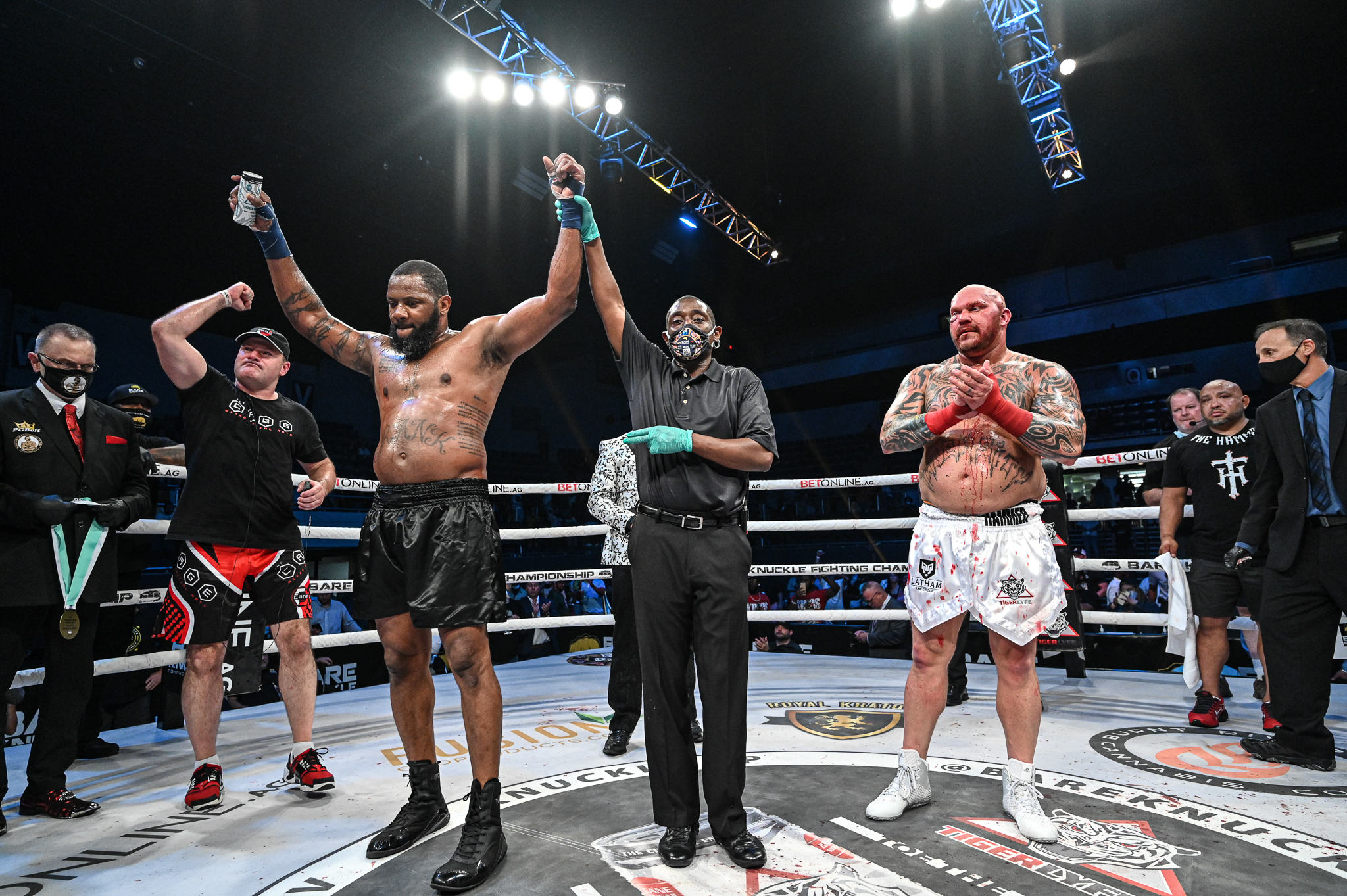 Bare Knuckle Fighting Championship, (BKFC), The World’s Fastest Growing Sport, made their Alabama debut an extraordinarily memorable one with BKFC-17, an outstanding action packed ten-bout card on Friday, April 30 in front of a large, loud and supportive crowd at the Boutwell Auditorium in Birmingham, AL and live on the BKFC TV App in addition to globally on FITE PPV.

In the main event of the evening, local fan favorite ‘Big’ Frank Tate, (1-1, 1 KO), of Birmingham, AL stepped in on three day’s notice for the injured Dillon Cleckler and stopped Josh ‘The Hammer’ Burns, (1-1, 1 KO), of Detroit, MI in the third round (1:02) of their heavyweight fight.

Scoring a knockdown in the first round, the taller and longer Tate kept the pressure on the valiant Burns dropping him in the second stanza. With two more knockdowns in the third, referee Chris Young called a halt to the action sending Tate’s Birmingham fans into a frenzy.

In the evening’s co-feature starting the Quarter-Finals of the BKFC 175lb. Tournament, former Alabama linebacker Marcel ‘Swift’ Stamps, (2-2), of Birmingham, AL was overwhelmed by Mike ‘The Marine’ Richman, (1-0), of Rosemount, MN.

Richman hurt Stamps early in the first round with a huge right hand dropping him to the canvas. Upon regaining his footing, Stamps was dropped again from an apparent slip but after stating to the referee that he had injured his shoulder, the fight was stopped at the 1:11 mark of the initial stanza.

Literally flying into the ring for his middleweight battle, Lorenzo ‘The Juggernaut’ Hunt, (5-1, 5 KO’s), of St. Augustine, FL continued his status as must-see viewing for combat sports fans with a fifth-round stoppage (0:58) of Josh ‘D-Day’ Dyer, (1-1, 1 KO), fighting out of South Dakota.

Displaying his full arsenal of skills and athleticism, Hunt dropped the courageous Dyer twice in the third round, once in the fourth and again in the fifth as the fight was stopped.

Leading off the undercard and making their BKFC debuts, lightweights Ronnie ‘Bam Bam’ Rogers (1-0, 1 KO), of Anderson, SC and Italy’s Dimitri Angelini (0-1), of Italy engaged in a vicious one round clash that saw Rogers’ counter-punching skills proving the difference. Dropping Angelini with a counter left hook to the head, Rogers blasted Angelini to the canvas again with a counter right to the chin with the frantic fight being stopped at 1:37 of the round.

Fighting in the heavyweight division, popular fan favorite Bobo O’Bannon, (2-1, 2 KO), of Mississippi and BKFC debuting Zach Calmus of Gloucester, MA fought in one of the most entertaining and blood-filled bouts in BKFC history. Throwing bombs from the opening bell, cuts were opened on each combatant early in the first round as the crowd at the Boutwell Auditorium stood and roared their approval of the action.

With the more experienced O’Bannon getting the better of the action, the fearless Calmus would hit the canvas a total of five times over the first two rounds, miraculously rising from each one. However, after round two the ringside physician stopped the bout declaring O’Bannon the victory.

In the light-heavyweight division, Afghanistan’s Ehsanullah Kakar made his BKFC debut a rousing success with a first-round knockout of Chris Sarro (2-2, 2 KOs), of Ellsworth, ME. With both fighters having early success letting their hands go with savage head shots, Kakar would violently drop Sarro with a massive left-hand counter to the jaw which sent him sprawling to the canvas. Unable to beat the count, Kakar was declared the victor as he celebrated in the ring.

Time of the stoppage was :45 of the opening stanza.

Competing in the middleweight division, Florida’s Robert Washington, (1-1, 1 KO), was declared the winner in the second round as Ryan Jones, (1-1, 1 KO), of Louisiana suffered a bad cut above his left eye resulting in the ringside doctor stopping the fight. The bout featured excellent two-way action prior to the unfortunate ending.

Fan favorite Tom ‘Your Local Ninja’ Shoaff, (2-3, 2 KOs), of Schaumburg, IL made his successful and much anticipated return to BKFC with a body shot stoppage of debuting ‘Flawless’ Nathan Mitchell (0-1) of Holly Springs, MS in the lightweight division.

Competing in the Free-View Prelims In the featherweight division, Rusty Crowder, (3-2, 2 KO) of Temple, GA proved to be too much for BKFC debuting Daniel ‘Black Mamba’ Gary (0-1), of South Carolina. A barrage of blisteringly, hard shots at the opening bell sent Gary to the canvas from which he would not recover. Time of the stoppage was 1:00 of the round.

Opening the card and fighting in the bantamweight division, Anthony Retic, (2-0, 1KO), of Birmingham, AL stopped BKFC debuting Anthony ‘The Bluegrass Kid’ Locker, (0-1) of Lexington, KY in the first round. Locker was dropped by a vicious left upper-cut and was unable to continue at the :38 of the stanza.