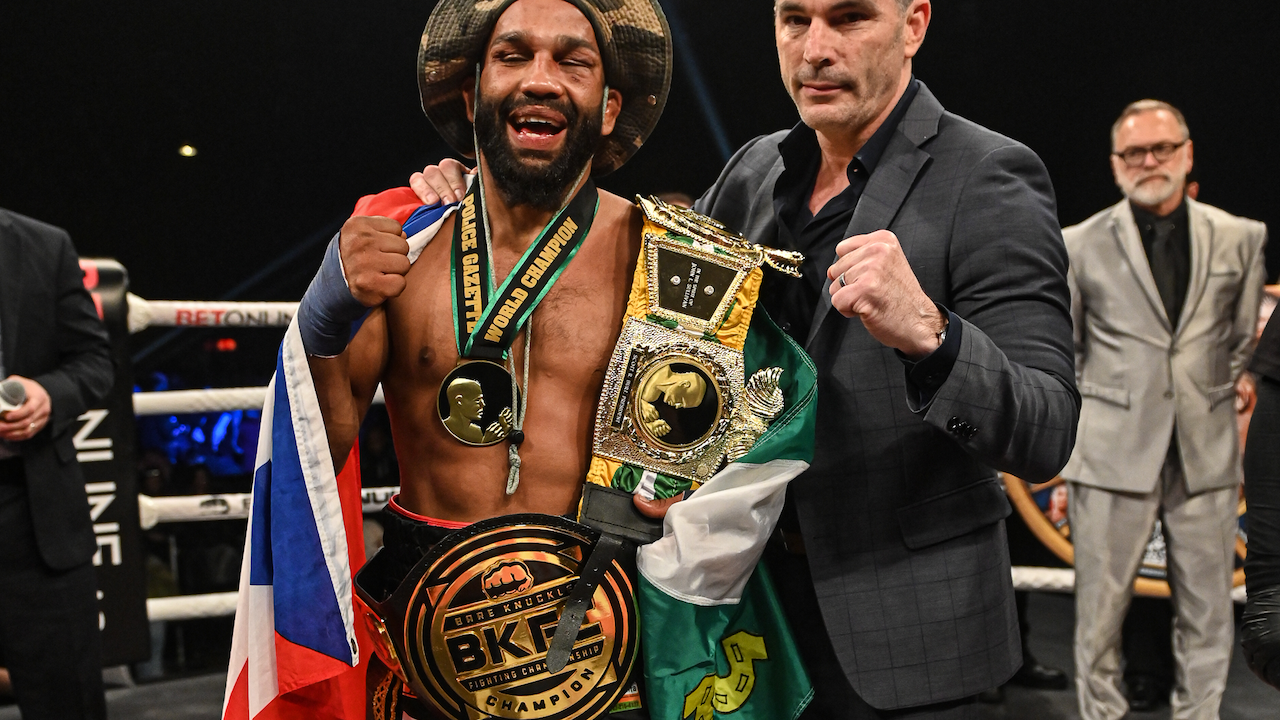 After a competitive, bruising five rounds, we have a brand new Bare Knuckle Fighting Championship welterweight champion. In front of a thrilled Jackson, Mississippi crowd, Elvin “El Bandido” Brito walked away with the BKFC title by split decision in a rematch with Kaleb “Lionheart” Harris.

Predictably, Brito started round 1 with his signature awkward and effective style. But rather than look for sneaky openings and angle around, Brito let his hands go and wobbled Harris with a combination. Then as Brito threw more, Harris clipped him with a counter right hand that opened a cut near Brito’s left eye.

From there, the bout continued with both fighters looking to jab and find ways to land solid shots, and both having difficulty landing much clean. Brito and Harris showed they’d added extra wrinkles to their bare knuckle game—a testament to the fact that both had improved since their first fight at BKFC 11.

Harris demonstrated that Brito could be tamed at least temporarily by a consistent jab and intelligent pressure. The problem was Harris’ punches mostly glanced off Brito, whose unorthodox movement makes him tough to pin down. And when the fight did go inside, Brito’s knowledge in the clinch makes him formidable indeed.

“[The championship] means I get to fight, I get to work and I get to do so many things for my friends and my community,” Brito told BKFC commentator Chris Lytle. “I’ll do anything to win. I’m a champion. I’ll fight anybody.” 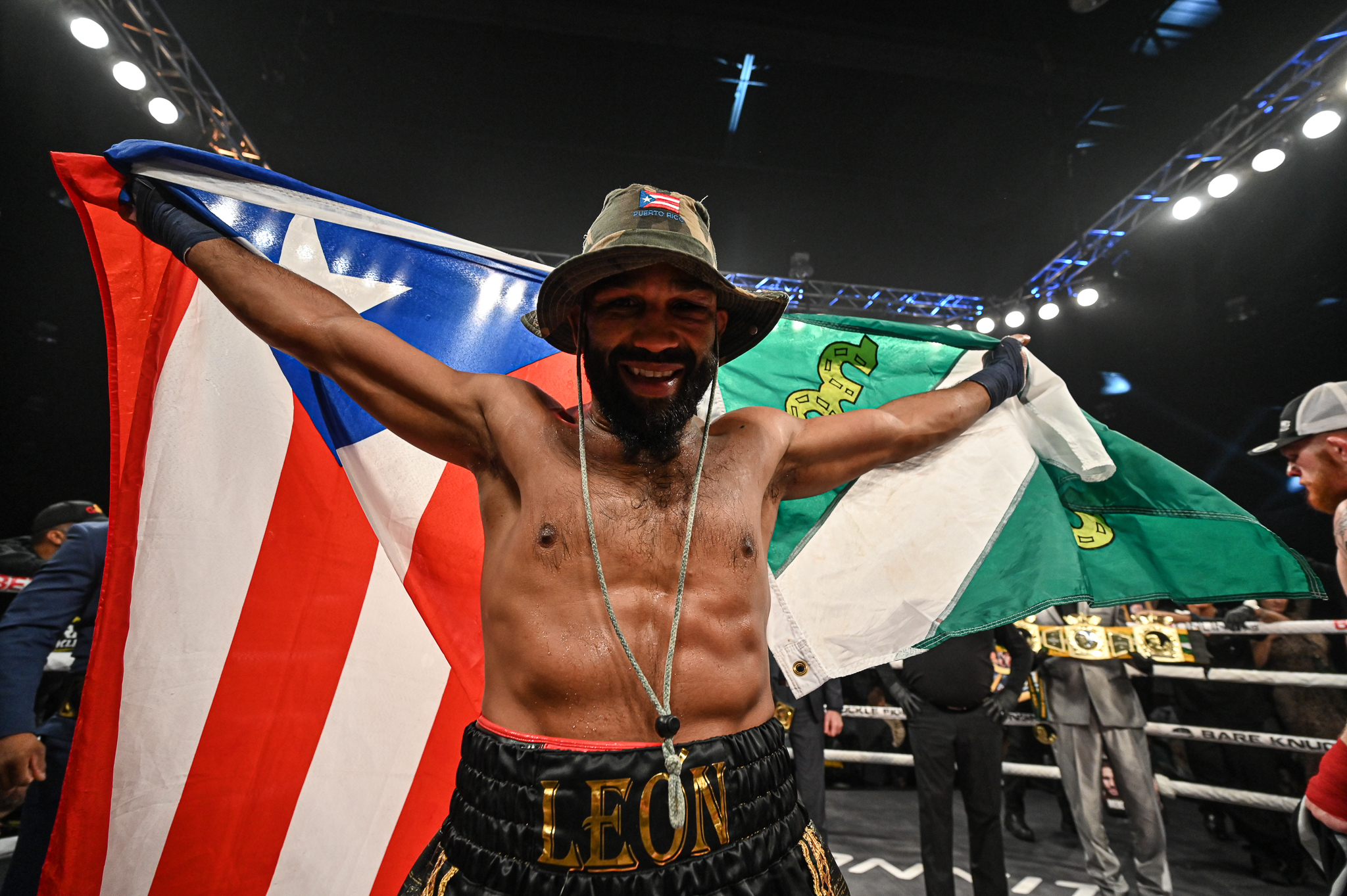 In the co-feature, former UFC star Alan “The Talent” Belcher took on BKFC heavyweight staple Bobo O’Bannon, the “Bible Belt Brawler,” and scored a one-punch knockout at 1:48 of round 1. After a quick lull early in the fight, both men opened up, tearing at each other in exchanges. By virtue of his size alone, O’Bannon was dangerous and even appeared to briefly rock Belcher.

But as O’Bannon got aggressive, Belcher timed a right hand that landed flush as ever and put Bobo down for the count.

“The confidence comes from doing this more and training my ass off,” Belcher, 2-0, remarked to Lytle. “Big props to Bobo. There was one time [he hurt me], but I knew I’d come back from it.”

“I feel like I’m the best heavyweight in this organization and I should be fighting for a belt,” Belcher said. Moments later, BKFC heavyweight “Big” Frank Tate approached Belcher during his interview to issue a challenge. 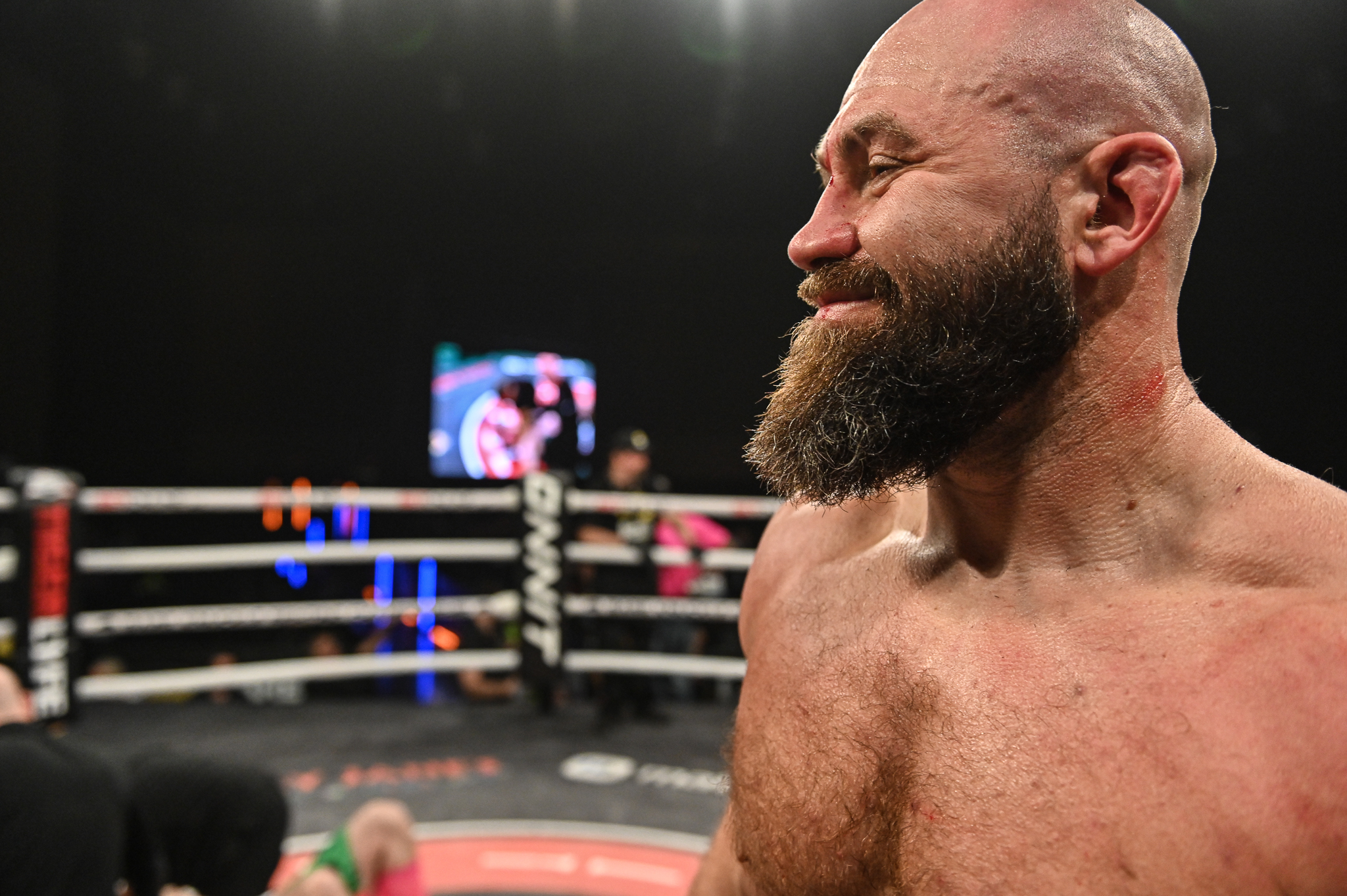 The feature fight of the evening involved Quentin “Hero” Henry and Chris “Golden Gloves” Sarro, and the card's first bang-up between the big men delivered on action even if it ended abruptly and initially with an air of uncertainty. Henry, an enthusiastic fan favorite, fought patiently as promised, but landed a massive right hand that sent Sarro down hard as the two traded shots. Sarro rose, but clearly affected, and Henry scored with a flurry that left Sarro rocked as the round ended.

With Sarro’s right eye appearing reddened and beginning to swell, both men picked up the pace and Henry hurt Sarro once more with a left hand. As they closed back into exchange again, though, Sarro scored a knockdown of his own despite appearing the more hurt of the two. The pace slowed before they tore back into one another and both fighters walked to their corners hurt.

Whereas Henry sat and looked for advice from his corner, Sarro refused to stay seated and frantically motioned toward his eye and right hand. Before round 3 could begin, the ringside physician ended the bout, tossing a win Henry’s way. 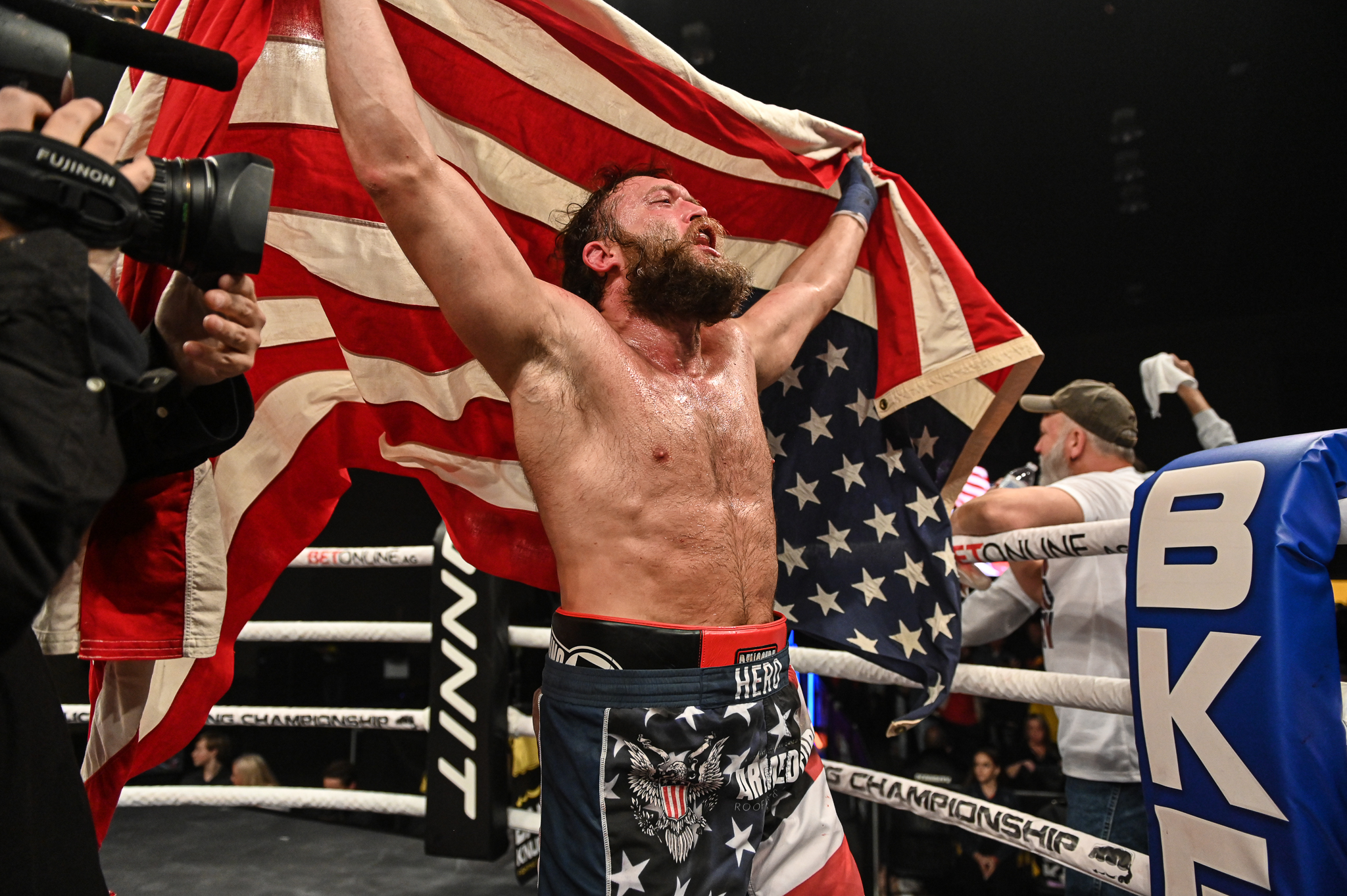 Light heavyweight Jared “Captain Deadpool” Warren improved his bare knuckle record to 3-1 in overwhelming and vanquishing the previously-unbeaten Scott “The Irish Spartan” O’Shaughnessy. Warren got the better of every exchange and sent O’Shaughnessy to the canvas with counter southpaw left hands three separate times. The third time, immediately before the bell to end round 1, O’Shaughnessy was unable to beat the count, and his record is now 2-1.

A brief but wild middleweight scrap unfolded between former UFC Ultimate Fighter competitor Jeremiah “Big Rig” Riggs and Eric “War Daddy” Thompson, lasting only 99 seconds but packing plenty of entertainment. For some reason, Thompson couldn’t help but wobble to the deck on his own just about anytime the fighters made contact, but Riggs looked to line up a right hand on the southpaw Thompson.

After landing a body shot, Thompson slid to the canvas and lost a point for voluntarily going down. As the fighters moved to clash once more, a right hand from Riggs put Thompson down for a full 10 count at 1:39 of the 1st round.

After two rounds of heavy chucking, light heavyweight Brandon “Boss Hog” Johnson nabbed a damaging 2nd round KO, sending Ryan “The Juggernaut” Jones to the canvas twice and reportedly knocking out a tooth with the winning flurry at the close of round 2. Johnson consistently won the footwork battle as the orthox fighter facing a southpaw, getting his lead foot outside of Jones’ and finding the angle to land his right hand. Jones looked to feint Johnson and fight from a distance, but Johnson had other plans.

As round 2 came to its end, Johnson found Jones on the ropes and unleashed a combination that knocked out Jones’ mouthpiece and made him take a 10 count. The official time of the stoppage win for Johnson, now 1-1 in bare knuckle, was 2:00 of round 2. Jones’ record is now 2-2.

“The Rugged Beauty” Crystal Pittman bounced back from her loss to Jade Masson-Wong at BKFC Fight Night Montana to bounce right hand after right hand off the face of Audra Cummings, who made her professional combat sports debut. Cummings displayed incredible grit and durability, absorbing everything Pittman could throw at her and lasting the distance, getting up from two knockdowns in the meanwhile.

Pittman, now 1-1, couldn’t miss for the entirety of round 1 of this women’s bantamweight clash, and the repeated right hands raised swelling over Cummings’ left eye and on her jaw. The women were all smiles after the final bell, however. Cummings goes to 0-1. 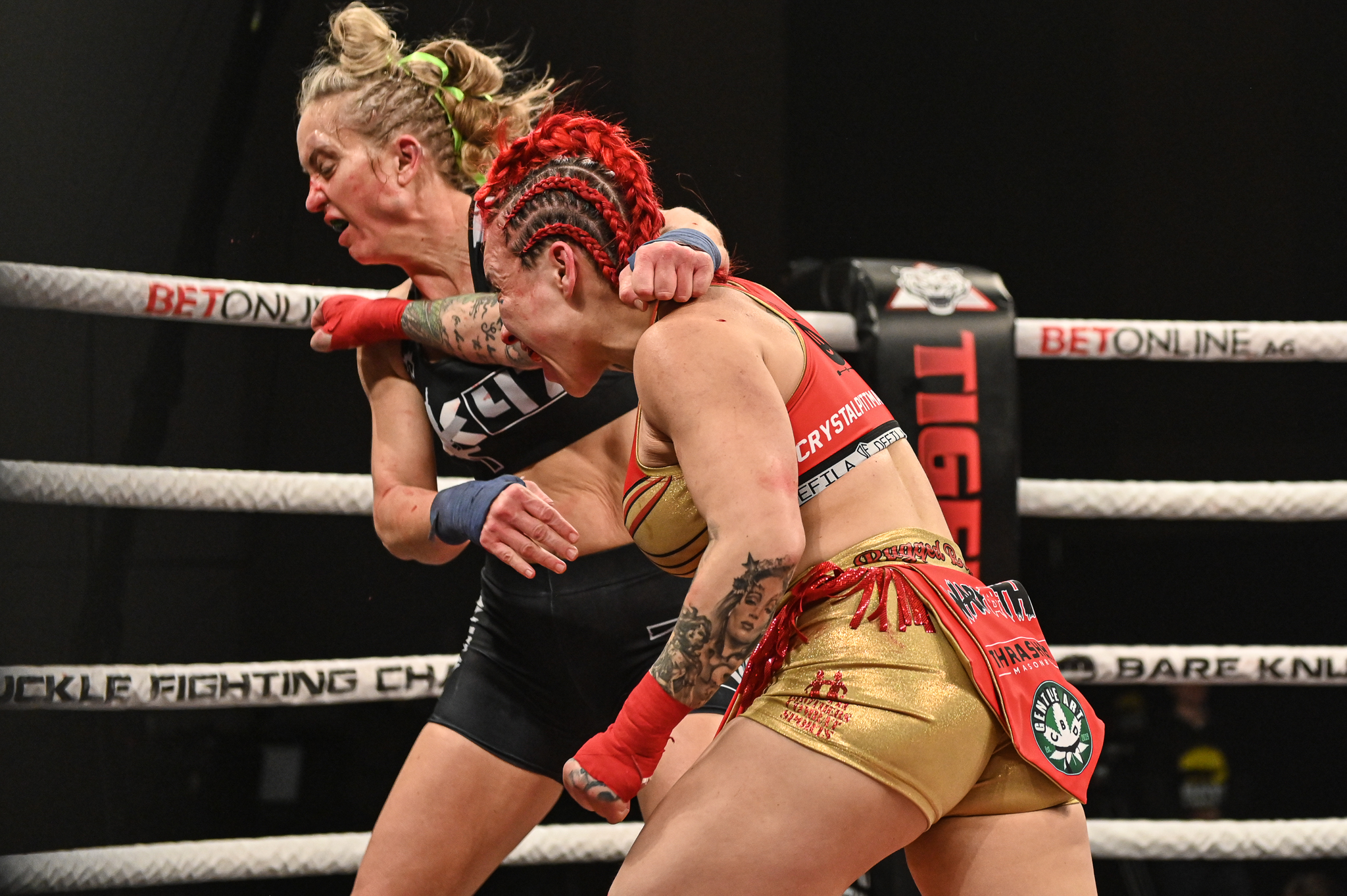 As the main BKFC Fight Night Jackson card began, welterweight Wade Johnson successfully burst onto the bare knuckle scene by stopping Nathan Mitchell in five rounds. Johnson consistently pushed Mitchell back, knocking him down four times before the bout was finally stopped upon the fourth knockdown, at 30 seconds of round 5 .

Johnson’s bare knuckle record is now 1-0, while Mitchell falls to 0-2.

Martyna “The Bully” Krol used her height and reach to cut up former UFC competitor Jocelyn Jones-Lyberger in a bloody flyweight fight that ended at the end of three rounds. Krol’s jab was too much for Jones-Lybarger to contend with, and before round 1 ended, the latter was cut badly over her left eye and the area began to swell in round 2.

Jones-Lybarger’s corner implored her to use head movement to work her way inside and avoid the jab, but it wasn’t until round 3 that she appeared to fight with a sense of urgency. Krol, who wasn’t keen on fighting in the clinch, was overwhelmed by Jones-Lybarger’s forward rushes and swarming inside work.

Unfortunately for Jones-Lybarger, the cut over her eye forced a medical stoppage at 2:00 of round 3, immediately before the start of the 4th. Krol is now officially in the bare knuckle books at 1-0, while Jones-Lybarger, 0-1, eats a loss in her debut.

As the women waited for the official announcement of the result, Krol shouted at Jones-Lybarger, “You know my name now!”

In the opening bout of the prelims, bantamweight David “El Necio” Diaz handed Albert Inclan a rough welcome to both the BKFC and the world of professional combat sports by way of commanding unanimous decision. Despite appearing to fight angrily in rounds 1 and 2 and absorbing punches after the bell in both rounds, Diaz righted the ship and put Inclan on the ropes, punishing him in clinches. Both men appeared tired in round 3, but only Diaz caught a second wind; he thrashed a rapidly-tiring Inclan in the last two rounds, fighting through a bloody and swollen eye. All three judges offered scores of 49-45.

Inclan made his way to the final bell seemingly on heart alone, and he moves to 0-1 in his bare knuckle debut.

“It was an incredible fight for the inaugural BKFC welterweight title,” said BKFC president David Feldman. “Look for big things in 2022. We just signed a big deal and we’re looking to hook up with some truly big names. We can’t wait.”